A friend just sent me a link on ‘Eventual consistency’, a term used to describe a problem of syncing data between cloud servers. This was in response to some bizarre behaviour I have been noticing in Facebook.

The term itself, eventual consistency, reminded me of Italo Calvino, for many reasons. Check out pretty much any of his books (If on a winter’s night a traveler) or stories (t zero) and you’ll know how important time was to him. 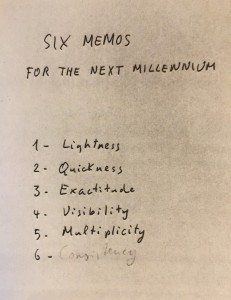 His final work was a lecture he was unable to give (due to a problem he had with time), entitled “Six Memos for the Next Millennium”. In the lecture, he outlined the six important ideas (or values) that needed to be addressed in literature in the future. He did not finish the sixth memo.

“In the front of the collection his wife later published is a list of the six memos in Calvino’s handwriting, though the sixth and final is faint, as if someone had attempted to erase it.” *

“The five memos Calvino wrote cover lightness, quickness, exactitude, visibility and multiplicity. The final lecture would have been on consistency.”

For me, this is one of the more sublime ideas in the world, and only Calvino could have pulled off so brilliant a literary stunt. Perhaps the term should be eventual inconsistency, as we are all prone to problems with time eventually.